A few different users have timing related issues. It seems to mostly affect older phones but some issues to new phones as well. We have thousands of app users and only a few issues reported but we want to be very proactive in improving the performance and timing issues that do occasionally occur.

Here are a few issues
One iPhone 6 user had 1 time issue related to time that seemed off
One Pixel Pro 6 user had an issue of it recording 2X the speed
One Keiser M3i user had issue when app went to background the cursor was not in sync with the target.

I am just going to merge all timing related issues to this thread.

I also had the interval and total time off by 5 seconds twice.
Once the cursor was also kind of frozen but the intervals changed. It only happened once and I also fiddled with split screen too much.

Oh thanks, yes I put this hear to hear from more people that might not normally speak up.

As an additional data point, I have had this issue on an iPhone 8 (using a Keiser M3i converter).

Restarting the phone seems to matter. Only doing steps 2 and 3 didn’t work for me. (Perhaps restarting shuts down some background processes?)

Hey!
I have had a similar problem lately. After pausing the workout to take a phone call, I resumed, but the intervals started too early (watts increased, while they should not according to the display), then the clock ran too fast (approximately two seconds per second). Really weird!

I have attached two screenshots. The first shows the workout how it appeared during the session. Notice how weird the watt tracking line jumps around on the time axis: 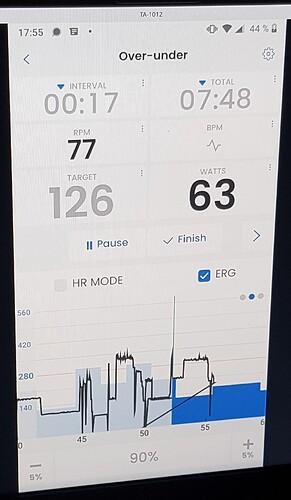 The second shows how the workout looks after finishing it in the desktop app. The watts are completely out of sync with the plan.

This is really broken for me. Haven’t used trainerday since.
I am running Android 9.

That’s terrible. Thanks for sharing. We will definitely fix this. It’s so strange for 95+% of the people and 99% of their rides it works perfectly but one experience like this just destroys confidence. As mentioned this type of issue is mostly older devices but I know that does not matter to the person with the problem and we want to support older devices.

Hi Alex,
Relatively new to the app. I did a 90min trainer session on Sunday and it was a difference of 11 minutes compare to my Garmin. I was using iphone 12 and with the latest IOS version.
What can I do to resolve this?

@alex I think there is more going on then performance issues of the devices. What comes back on regular bases is that some sort of interruption happened on the phone and then the app goes crazy. Might be a phone call, a social media message, or similar.

For now a phone restart and limit background activities and putting the app in the background but we are working hard to resolve this right now and can hopefully have something to resolve it in the next week or so.

Yes, I agree something strange. We will find it. Do you have any issues?

Had this one a couple weeks ago:

@Alex Yesterday i had a problem too. Caused by a Whatsapp message coming in. The incoming message makes the TrainerDay app pause the workout. I didn’t notice it right away because I had Fatmaxxer running in the foreground and TrainerDay in the background. Seems like you need to check the continuity off the app when other things happen on the phone.

Oh yes, thanks for the reminder.

Thanks for your work! If it works fine (as it has most of the time I used it) it is the best App out there, as it exactly fits my needs!