This too bad… I was really hopeful we had it resolved. Maybe it could be related to power match, I am not sure if we have tested the timer with power match. Thanks for the detailed feedback, maybe it is performance hard to say. We will keep going until we get this resolved.

Ok we found a really slow Android device and it has serious timing problems so it seems that it performance related. This is great news meaning since we can see the problem we can fix it. Hopefully quickly.

Ok, it seems we have some performance improvments that make it work correctly on a 3-year old $89 Amazon Fire tablet running Android 5.1. Yesterday it had timing problems on this device and today it is working correctly at 1hr right now (should be 90m in 30-min from now). We should have a new build today that will hopefully put this issue to rest.

Ok version 1.8.8 submitted to Android store for beta users. It has a couple of small visual bugs that I don’t think anyone will find, but they are not very important. We will resolve those and then try to push this to all users.

If any beta users can test that it would be great. Hopefully today we will push it to production also.

I rode about 1.5 hours on 1.8.8 today. Didn’t notice any issues with the app. I didn’t have any issues while app was running in foreground before, so not sure if I would have seen anything different anyways.

Yes this is bug in beta version that is fixed already in next beta version. Good to hear, thanks for feedback

I had a strange experience on the Android app on my phone today. It was a 90 minute workout, and at about the 1-hour point I flipped over to Audible (TD still running) for about 5 minutes. When I flipped back to TD, the interval time remaining had lagged behind. It seemed to be trying to catch up - it was running at maybe 2-3x normal speed. And after a minute or so, it did catch up and the app was tracking the workout normally.

Then a second strange thing happened - I received a phone call, which I dismissed. When I switched back to TD, it appeared to have reset my workout - it was back at the start of the workout with the Ride now button showing. I clicked Ride now, and then things went kind of crazy - zooming the workout chart in and out, pause/resume button alternating, as if the app were controlled by automated testing software. I restarted the app and the workout, and it appeared to be working, but it wasn’t controlling the trainer. I tried toggling erg/free ride but I was getting only around 50 watts from the trainer.

I’m not sure if this is related to the performance issues, but I would be happy to beta test.

Wow, that is the strangest combination I have heard of. Yes, regarding time catch up, this is how the app works. There is no such thing is accurate time for doing events like this, so you have to fake it and adjust and if it gets way off then we play catch up or make a large jump, usually the catch up is only milliseconds so you don’t notice but when it is way off you do. Other companies/products just have better (or more mature) code so you don’t notice.

Our new beta version has some performance enhancements and improvements to timing but we still have one more “killer performance” version that will be ready for beta next week.

The answering the phone is the strangest one, I can’t imagine what that is. You can join the beta group in the Google play store, just go to the bottom and it should let you join. I know the new beta is better than the current public release version.

You can also join the beta discussion group here.
https://forums.trainerday.com/g/Beta_Users_Insiders

I’m happy to report that the latest beta version (1.8.9) has finally and truly squashed the stretching time bug. Thanks Alex and crew!

Yeah!!! So happy to hear. One user still has a problem with it on a slow device but we think we will have that resolved in next version that will be much faster performance.

I also saw this day before yesterday. Same setup

Thanks John, we will look at it and get it resolved ASAP (I hope).

John, we have tested with lots of devices and can not duplicate this. Can you provide more insights? Are I know you said iPad but which iPad? What trainer are you using, any other devices? What version of iOS? Are these using auto-extend? Did you do any merging of workouts? Can you send me a link ideally to your activity in trainer day or to the workout you did? Are you using power match? For example if you put it in the background for extended periods of time? It’s possible our app auto paused at some point but garmins did not? You could send me Garmin TCX (or fit file).

Below is using test mode in our app but we are getting the same thing connected to devices. 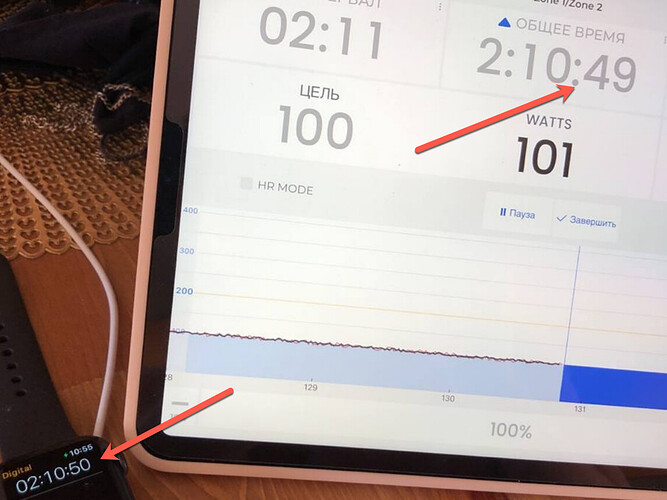 Alex,
Thanks for the attention to this. I really enjoy the App. The problem grows with the length of ride. My energy goes in the opposite direction. The ride I just finished (details later) had the last 2 min last for 2 min 53 seconds.
Equipment:

How do I get these files to you?

Great thanks for info. We will figure out the problem. It might be performance problem of iPad Mini but not sure (related to our app, maybe the performance is worse in latest version is why it is affecting you but previously our app auto-corrected itself, maybe this auto-correct stopped functioning correctly). I have an old iPad mini I can try.

I see your last workout 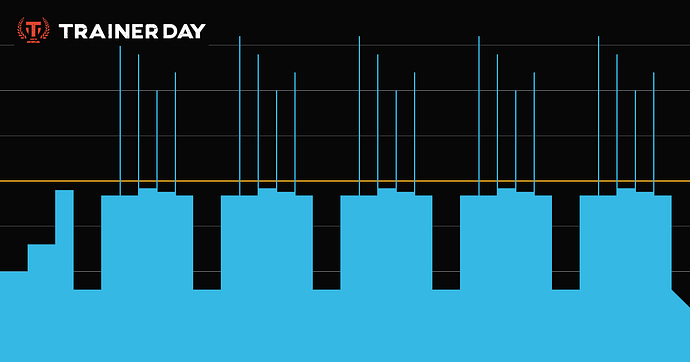 So it is definitely the iPad mini 2
over the next few days I’ll experiment with the iPad config.