I used 1.8.42 on iOS beta version with Testflight, i choosed a 30 min endurance classics. At the ending i push up to 115% and it was extended automatically, passed a few seconds maybe then i went to Library and added the same 30 min endurance classics to the workout with Ride now and then target power was about 450 watts. I could decrease only to 75% and i just started feeling bad i have to push that 450 watts for 5 minutes then i realised i can jump to next interval ( never really used this button

) then i could continue the 30 min endurance classics with original watts and 115%.

So extended part has some bug when other WO added or increasing to 115% was the problem? 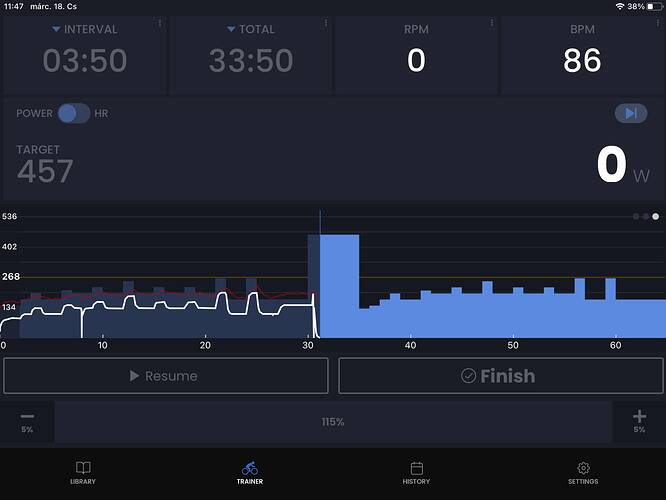 Yes Auto-extend automatically takes the average of the last interval you were doing and extends at that rate… It’s unfortunate if you happen to be at 115%. Yes next button is your savior. So this is the correct beavior. Does that answer your question?

Oh I see, you are correct that sounds like a bug… We will look at that, I was looking more at the visual and thinking it was extending something that was already big (and strange). Thanks for the clarification. Should be easy to fix.

We duplicated this no problem so easy to fix