Intervals.ICU integration completed. Available to everyone

You can watch a video here on how it works. Generally it works the same as our TrainingPeaks integration. Push workouts, push plans, and workout of the day features.

This is a great feature but I don’t understand the logic behind it. For my understanding, it should show me today’s workout in intervals.icu and maybe the workout from yesterday and tomorrow too. But this morning I had 8 workouts in the wotd-list, starting with the one from last saturday and ending with the one in two weeks. Is there any way to limit the amount of workouts presented in that list?

yes it should not be that long of list. We should probably limit forward to 2 days, not sure why you are seeing two weeks. Might be a bug.

TP does it a little different in that once a workout is completed they don’t show it but there implementation is not good either in that if you do something other than todays workout they consider it completed anyway.

We have not added dates in our app yet, but it should be today’s date on top of the list. That is coming in the next build.

This is actually an intervals bug or has feature that has something to do with multi-day events. We can fix this in our code so it only shows the next 2-days.

Ok should be better now and today should be the first one in the list and say “Today” in the title.

Looking good. Now there are only 2 workouts in the list. The one from yesterday (labeled as „Today“

That’s fine for me. Thanks!

Maybe a time zone issue. We will figure that out. Thanks.

Thanks, yes it should show 2 days back and 1 day forward + today. Sounds like today label is some how wrong. I think it is timezone issue.

I am having an issue loading workouts with this integration. On my iPad, when I scroll to the third workout (all 3 show today even though they are from Monday and Tuesday, today is Thursday) it crashes the app immediately.
I have a video I took, but I can’t attach it here.
I even deleted the app and reinstalled it. Same issue.

Hi Justin, sorry to hear. We have the bug fixed showing Today’s hopefully that fixes the crash issue too. One other user here has a crashing issue on his iPad Pro but no issues on his phone. I can review our error log today and see if I can see the issue you are having. Our new app version should be in beta early next week. If all goes well in production by the end of next week.

I see an error in our log for you about invalid geometry. My developer is reasearching but this makes me think it is some type of issue with a specific workout you have (not your problem ours). I know you signed up for TD for this feature so we will credit your account for the amount of time it takes us to get this resoloved.

Justin, my developer said he would like to see this video if you can email it to me at: support at trainerday.com

I am sending it now.

Hey @Alex old user of ergdb here but brand new to the app.
First of all, I’m really happy to have subscribed and love the app overall.
I have a question about integration TrainerDay <-> Intervals.icu, hence I’m highjacking this thread.
My workouts look and work great on the app. I exported a plan to Intervals and it also works great. Nonetheless, I expected it to sync back after completed (meaning, today’s workout showed on the app, I rode it and it appeared as completed). It looks fine in TrainerDay but it didn’t show as an activity in Intervals (I could still see the planned workout).
I ended up syncing thru Strava but then I had both (planned workout and completed activity) on my calendar (in Intervals). I would expect that it could recognize that the finished activity was based on the planned workout and merge both (even if I had to do it manually). I know it sounds more like a feature from Intervals.ICU side but just wanted to know if you have a suggestion of workflow to speed things up. If not, I’ll just sync thru Strava and then delete the planned workout, no big deal.
Thanks, best,
Fred

So in the end you are likely doing it the right way and hopefully David can figure out how to merge the planned and completed. I will send him an email and mention this problem too which we might be able to help him.

Planned workouts from the past in intervals don’t count for Fitness parameters. If the day passes by and you have done nothing, it doesn’t influence your PMC chart.
If you don’t like that passed workouts are displayed, you can toggle that in the calendar options. On the day itself you will see both, but the next day, you won’t see the planned workout anymore. 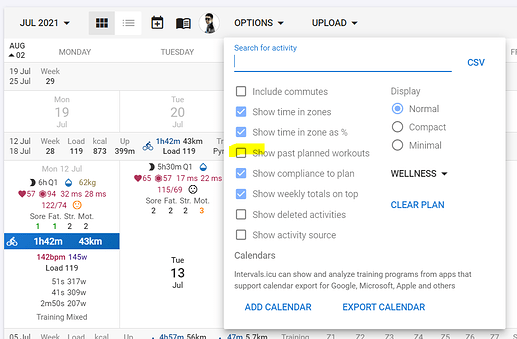 You can sync to dropbox. Both apps support that and it’s probbaly easier then Strava. Main advantage is that your data is safe in dropbox. If you cancel Strava account, david has to to remove all your data from intervals per their user agreement.

Thanks a lot for the fastest reply ever. Sounds good - I’ll keep syncing through Strava (at least for now). I’ve actually been using GoldenCheetah for years and it does the same (uses Strava) so no change there. Thanks for contacting David on my behalf about this matter.
Best!
Fred

David said if you want faster syncing just connect TD dropbox and intervals to dropbox. That should be super fast. I have not tested it. I did not know he supported dropbox. He is planning on working on this planned workout problem.