I love the IntervalsICU integration. Is it possible to get the “OE” added to the sent workouts? On intervals.icu , they have the “Press lap” flag that when sent to Garmin makes it wait until the lap button is hit (same as the OE). The TD workouts aren’t getting sent with this.

For example, this workout: 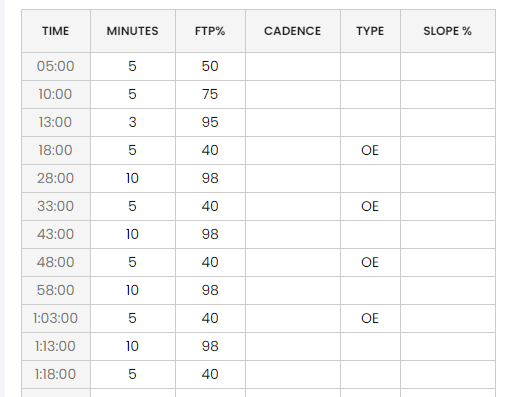 is sent on Intervals as: 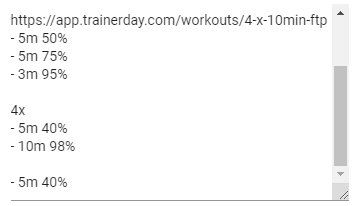 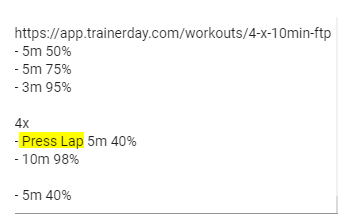 Without that, then the OE only works if I send intervals to Garmin, so it has to be sent two times - to Intervals for planning, and to Garmin for the actual workout to train with

Intervals.ICU integration completed. Available to everyone
Alex September 27, 2021, 7:20am #2

Got it. Assuming their API supports this it should be easy, and if it doesn’t I am sure David would add it fairly quickly.

On the same vein of intervals.icu, since a TrainerDay workout that is open-ended with a FTP % of 60% is sent to Garmin basically as a free-ride. It would also be nice if this was sent to Intervals as a free ride. So intervals.icu doesn’t have a target for the interval… not sure if the API allows this either but could be along the same change with the OE.

This here is sent to Garmin from intervals.icu as a “free ride” aka no target interval 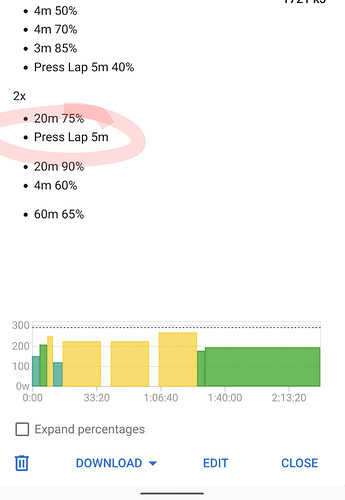 They don’t necessarily call it a free ride, it’s basically just an “OPEN” no target interval which is functionally the same. I personally use it almost all the time.

This is exactly the behavior I want to support as a platform. Meaning make outdoor workouts as enjoyable as possible. A little structure and a lot of fun

so I am happy to add this kind of stuff. Or doing structure at the right time… OE …

I love to hear that

, I of course use the app throughout the entire year, creating and sending workouts to my Garmin mostly during the summer, and then when I can’t get outside it’s easy to open up the app on my phone and train indoors. Of course a lot of people only use these apps during the winter or “indoor months” but as more people see and more functionalities are added, it will be able to reach that goal.

I wonder if you use the “FR” as free ride on the Zwift files, and the same “FR” as this “Free Ride” on Garmin – and other devices as they support it. Then keep “OE” as an “open-ended” interval (click “lap” to move on). Regarding this feature-request: Multiple "Types" depending on device , you could then make a “OE, FR” that would be an open-ended free-ride on Garmin devices – ride at any pace until you click lap button to move on – with other devices as they allow

Yes that is exactly what I was thinking OE, FR for open ended free-ride on garmin but only free-ride in Zwift since it does not support OE. Yes might as well combine this mutiple types request at the same time.

@Alex I am going to add one more part to this request. Of course, it is only a request

. It would be nice if workouts sent to Intervals had the same type of “options” as Garmin devices:

As of now, all workouts from TD sent to IntervalsICU are “Power Lap” , while IntervalsICU workout creator has much more options (not only for Power, but I think Power is a good start). I’m not sure what all could be sent and what the API allows, but it would be nice to have an option to at least send 3s Power for example. Percent of FTP of course is great, but when sending to Intervals (which then sends to Garmin, etc), having more than the default Power Lap option would be extremely valuable. Personally I never have used Power Lap 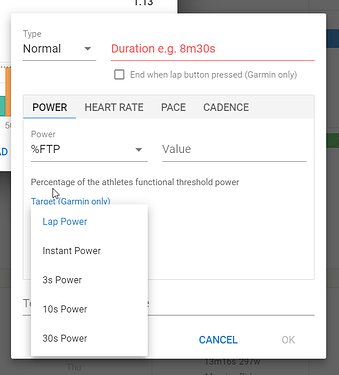 Oh I see. I did not test this integration at this level. Generally I think 3S should be the default, not lap power. If I remember we are sending ZWO file to David which does not have this option. We might have to switch API’s as he has another one or discuss with him in general.

I sent David an email too. Let’s see what he says.

Yes he told me what to do. I think my developer added OE today but I did not test it. Super easy but adding FR requires more work

Thanks, my brief test shows that it is mostly working, but there is one small bug. In this workout here, you can see that the OE is only for the rest intervals: 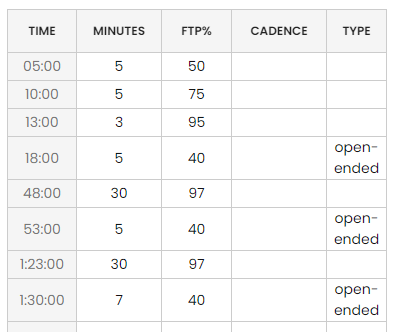 But it was sent with “Press lap” for the entire set: 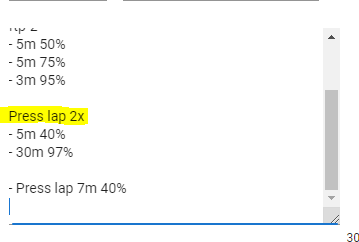 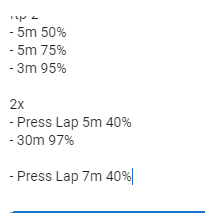 Oh yes because of this 2X and the way we do ZWO files. Temporarily you could change the second rest to 41% and it would fix it but we will fix this a better way

You are not going to like our Coach Jack training plans

That sounds great. I will likely do the “fix” for now, or just edit the sent workout for the time being. Thanks for letting me know

Haha, yes this is a long and often terrible one. I have worked with a few athletes that have done a 3 x 25min at the end of an FTP progression, but it’s rare that anyone wants (or needs) to push their FTP out that far. I may have mentioned before, but I normally do a steady state 40-60min FTP test so I know what my time-to-exhaustion (TTE) is at FTP, and then progress from that number to 55-65min. For example, my latest FTP test was 39mins long, so I start by doing 4x10min FTP, then go to 3x15 → 5x10 → 2x25 → 6x10 (or 3x20), and then either this 2x30 workout, or try and push it a little bit further to 65-70mins, or just call it good and take that as a hint that it’s time to move on to some Vo2 or other build work

. I tried a 1x60min once before but that just wasn’t as fun as you could imagine

. Personally I test a little bit high on ramp tests compared to my actual FTP so I’m more like 30-35min TTE so it would probably take a month or 1.5 to get it out to a 2x30min effort. Anyways, that’s just something I personally like and do and seem to get good results out of. My FTP has gone from 325 to 310 to 290 over the last year and a half and has pretty much been stuck here (290) with my current hours of training. 2nd child and sickness hasn’t helped with that

. Hoping to see some good results again over the winter

This has been bad summer for our family sickness and project wise but i am ready to get back on the horse ASAP.