Power and duration for the next interval

Ooh, don’t misunderstand me. I don’t want you to create a MT clone. It’s just that it had a couple of very nice features and the way interval comments were treated was one of those features I really loved!
As a start, you could simply use the Text description from the workout to populate interval comments. It doesn’t have to be a coach’s advice.
But comments should be easier to use. A comment for a hard interval needs to be displayed 10-15 sec BEFORE the interval starts. Right now, an interval comment is displayed while the interval has already started. And if you put the comment at the end of the former interval, you have to be very carefull when copying and changing the workout to make sure the comments remain at the correct timeline.
I would also like them to display a little longer and more intrusive. Right now they are rather discrete and may go unnoticed.
In MT you could define a comment to appear at almost all moments, referenced by the start of the interval:
Example: -00:10;00:05 would display that comment from 10 sec before the start of that interval untill 5 sec in.
If you put all the timing parameters and comments in a separate “box”, it’s like playing subtitles on a movie.

Oh yes, I definitly have this negative offset on our backlog. I just moved it so it is 3rd on the list currently

Yes I like this idea of automated interval comments but maybe it needs its own setting. I would say it should only show when the intervals are > 80% or something and increase by more than 10% of current interval… Not sure.

I don’t see our interval comments much but I was just saying integrating into the UI better and improving the experience of a snoose feature or something might help.

I would also like them to display a little longer and more intrusive. Right now they are rather discrete and may go unnoticed.

Yes this is the feedback I need. Because I am not training right now and don’t test this very much this is what I need to do. It was just a quick V1 version but needs much better experience. I will add this to the list. I will add a mockup here.

Yeah I tried that it looks a little strange. It fits but I think Claude’s idea of using our interval comments makes more sense to me. But we need to improve our comments. But please keep giving your ideas. I really appreciate this and I would love it if I felt better about your idea. As I generally like something more integrated like that.

Even on steady-state endurance workouts, the comments can be of good use. On these rather boring sessions, a comment that reminds you of paying attention to your “form” is valuable. Pay attention to your pedal stroke, relax your shoulders, don’t pinch the handlebars, relax your toes…
It’s easy to have your mind wander off and loose good form on your trainer. And then you loose some efficiency in that session.

Oh no for sure I want to do that too but that is something different than just next interval is X watts for Y minutes. I am trying to find good coach with similar philosophy to training as Coach Jack and that is a good/motivational writer to help with these interval comments but that will only be a feature of Coach Jack based workouts.

I have about 600 zwift created workouts with all the comments that I can review and see what their style is but really I want it based on coach jack’s belief system of what is important. So this is not an easy task to accomplish unless I try to write it myself but that is pretty time consuming I think.

2 posts were split to a new topic: I like auto-pause (but we are going to change it)

I’m wrong or not, but Maximum Trainer hadn’t closed?

Yes it is closed but the code is still available for someone that wanted to try to get it working again.

I would also like to see a figure of what power is required for the next interval. Why not put a small number with a little arrow below the current power output with the upcoming figure.
Maybe do the same with the timer?

The problem is on small phones there is no room for anything more. Even on large ones these small numbers are very hard to read for most people. I am seeing even in email and reviews people keep asking for this so I know it is a hot request. Another option is to do what Xert does and build a web page that shows you more information that is synced in real-time to the app. I know this is probably not ideal.

Not ideal, but along with the beep sound, you could have a config option that does TTS for the power and/or duration

Finally you could put it on the screen and have a very minimal UI configuration section that lets you turn elements on and off. Default you can still target a decent layout for all, but this could give you some leeway with tablet vs big phone vs small phone because at least you have an option for people in the meantime.

Ah ok. I have been using a phone plugged into a Dex station on a 32" monitor so space didn’t really seem to be an issue. I understand that on a small phone screen, there isn’t much real estate left for it.

Just an idea but what about a roller with the next power figure slightly grayed out? I will try put something together and send it through

Interesting idea on TTS. I love getting ideas. Lots of what is built into this app is based on the ideas from our users.

Yeah I am avoiding more UI configuration mostly because it requires so much testing across different devices and we are so small. If it is config that is the same across all devices and does not affect the core layout then it is not so bad. I know many users would like Garmin or Wahoo like screen editor but we would need to be much bigger with bigger test team at the minimum.

We have this feature that shows interval comments, and we could just use that (maybe improve them visually at the same time) that is just a temporary popup. That would be easiest, I would even say easy.

This is great. How do we access the pop ups? Can we edit them?

Right now we can’t edit coach Jack workouts but other workouts we can. But I am saying we could have a switch that you just turn on to show next interval. 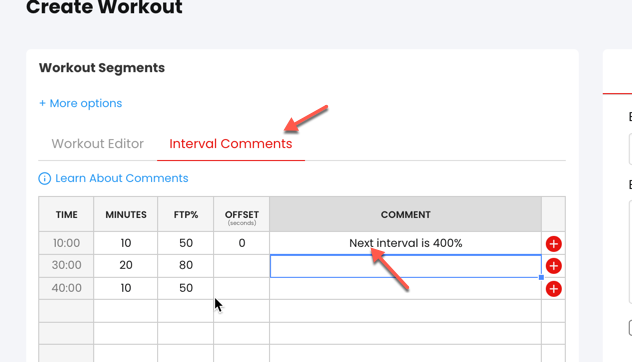 This would be great! I presume that the % would be translated into the actual power required depending on FTP settings?

If and when we do it automatically then yes

so I think we will just do this soon and we can try it see how it works. It seems to me it should say 8 X 1m @ 309W with 2’ rests. For interval sets. Also it seems it should only show these messages for greater than 70%?

I just felt that when doing my workout, even though I could see that the next effort was a lot higher than my current effort, I had no idea of what it was going to be. I think the reason this matters quite a bit to me is that my power trainer is not controllable so I need to know what my power I need to push out.