Requested by meesterlars - Could you please enable split (floating) view on ipadOS? It would be great to be able to run your app next to or on top of another app, like netflix, for example.
With that goal in mind, how about making the plus/minus buttons larger, making them easier to hit.
; )
One final tweak; the resistance should be possible to change by sliding one’s finger across the bottom bar, between the plus and minus buttons, don’t you think?
Otherwise, fantastically simple app!
Thanks!

Alex’s reply:
Hello, thanks so much for the compliment. I see about 3-requests here. I will keep this request as the spit view request. I will research that. Can you describe what you would like to see? The full app on one side of the screen? I never use this mode. I use iPad + phone as a split screen for Netflix and our app

I know TrainerRoad for example has on desktop some super small minimized mode. Just trying to fully understand what you are asking for.

Regarding the buttons being bigger, I will create a second request for me. I am always using my thumb on my phone and hit the tab key instead of + and it drives me crazy… so I am well aware of this one.

Regarding slider can you describe what you are tryinig to accomplish? A faster way to make big changes vs small changes? One other user suggested long tap for big change and short tap for small change in resistance. Also are you meaning resistance or ERG mode?

Thanks for the response. : )

So, what I would like is to essentially have the iPhone view of your app floating over another app when running on iPad. Kind of the inverse of what I’ve taken a screenshot of here: 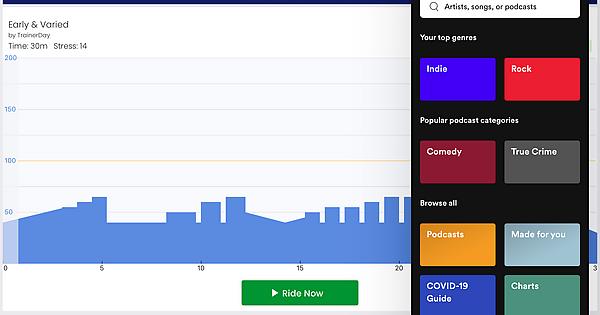 Does that make sense? This would allow TR to run in parallel with any other app. Spotify, Netflix, Safari, whatever.

As for the slider idea; yup, in resistance mode I’d like to be able to make quick changes and thought a slider would achieve this best. Not critical, just a nice to have. ; )

Metdechcd’s reply:
I’m not a fan of a slider button because it is very hard to adjust with sweaty hands and heavy breathing… I prefer the short-long touch approach or just as it is right now – a few consecutive taps do the job perfectly. I have my phone screen on a Touchscreen laptop: Nice BIG buttons ;-), and a TV screen as secondary screen connected through HDMI for all media purposes.

Meesterlars’ reply:
OK, but that grey bar at the bottom isn’t doing anything, right? Sweaty hands or not, let’s put it to use!

Alex’s reply:
This is a risky slide, a big increase in resistance on wahoo does crazy stuff for example. Too easy to accidentally slide would be my guess but we can focus on the problem rather than the solution. The problem is a better way to make large vs small adjustments. 4 buttons instead of 2 for example, or long click vs short… We first need to figure out how to make it so it is easier to click the buttons we have. It’s way too easy to click the tabs now when trying to click the resistance change. Really if you look Zwift or TR you don’t even have a fast, easy way to make changes so we are already more flexible. And in settings you change change it from 1% increase to 10% increase so one click means what you want it to.