I’ve seen recommendations for the watts per step in an FTP/MAP test to be 25w/min for standard males and 20w/min for elite cyclists. I’ve also seen recommendations to make the steps as small as possible - 5w/12sec for standard males and 4w/12sec for elites. With the ability in TrainerDay to do proper ramps (love that feature), would it make sense to take the test to the full logical extreme? Start at 50% and ramp to 200% with a smooth increase over the appropriate time? Or is there a reason to keep some sort of step?

Hi Jim, great questions. We will be building a TrainerDay official ramp test in the next month. I likely will do it like the other platforms but I have not decided. We don’t actually currently support the idea of fixed watts unless you keep a fixed FTP. I might create a special fixed watts for this ramp test not sure yet. I also might allow people to use their own ramp tests but we just calculate taking the last minute and multiplying by .75 and auto switch to cool down when failure occurs.

So my friend is probably the ramp test expert of the world, in the fact that he has been doing ramp tests on World Tour pros for 20 to 30 years (mask style…) and done lab testing for many of the top pro teams at one point or another. He suggests 25-watts starting with 15-minute warmup beginning at 40%. He uses the same protocol for all levels of riders and he test and coaches a lot of amateur’s (juniors) too. But my guess is at the minimum the are 220w FTP guys… But he is so dialed on his protocol that he does not change it because he fully understands the results. He has clarified to me, it’s more about consistency of practice than it is the actual ramp steps. I have a fairly low FTP (193) and have done 25w steps and I feel better (seems more accurate) with smaller steps. I like closer to 10w steps. I personally end up with very similar results with 25w steps or 10w steps.

So I don’t like the feeling of a continuous ramp. I think it is motivational to have steps and trying to push it to that next step. Wahoo trainers are not always predictable with ramps, possibly others as well. Everyone I have seen does 1-minute steps but my belief is kind of like yours that it probably does not matter that much as long as you have a consistent protocol.

FYI - One interesting thing about pros are for them it is actually harder to do 50% that it is for us… My friend keeps telling me pros don’t like to sustain upper zone 2 rides for long periods of time because it is a lot of work and for me upper zone 2 feels like a walk in the park. It’s kind of like a car with a big engine, you can feel and hear the difference when their is a big engine. So my point is his warmup starts at 40%. 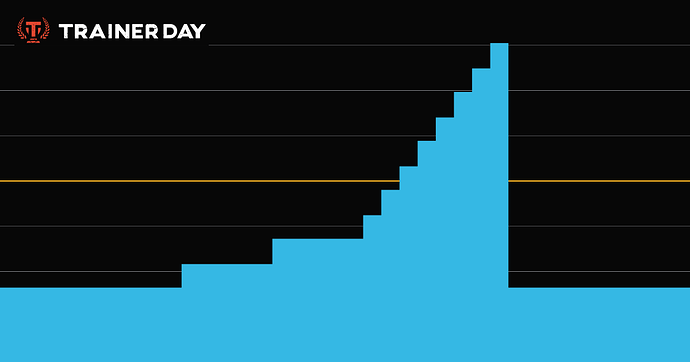 Thanks, Alex, for the great explanations and insight. I look forward to the test you put together. I just did my first test today with the smooth ramp. I can definitely see how getting to that next step would add motivation. I felt like I was more focused on keeping a steady cadence as the resistance increased and getting to a higher wattage took a back seat. I’ll try using steps on my next test.