Power match and dual side recording for dual side PM

Hey there,
I tried to search the forums on this, but still don’t get it - is there a way to use power match with dual side power meter? App sees both sides as separate power meters and I have to choose either left or right. As my legs are not the same (48/52 at the very best), this means power match doesn’t work for me.

you’re seeing your 4iiii PM as separate PMs in the app? and can only connect to 1?

that what you’re saying?

It’s a workaround for sure, but I would prefer to record power from both sides in their app and use the sum of two as the outcome. Next to that, the L/R balance is not constant.

Ok, others have mentioned liking dual sided recording so this would overlap that request.

I know Assiomas can be set so two pedals average into one, which is essentially what we would have to do.

So your thinking is that some days one leg has large differences compared to the other. 48/52 one day and 43/57 another? And so your workout is 10% harder or easier than another day? If they are more consistent then I would say the training effect differences are negligible and FTP test s are not accurate to 10% of a LT mask test. But if you have frequent large fluctuations that makes more sense as to the importance of this.

It’s maybe a limitation of Bluetooth, since TR app with ANT+ sees as single PM and again separate over BT. I’m trying to move away from TR without losing too much of the functionality.

Also a software/hardware limitation in that I believe how it works with Assiomas is that one pedal connects to the other and does the averaging. Not sure on Ant+

Anyway I understand your request. To be honest as much as we love more customers

I would say it seems unlikely we can get to it this winter. We would do dual side recording at the same time.

Thanks much, @Alex, I appreciate. Nice to see exceptional attention to our needs.

BTW, just made a test in order to find out if Wahoo Kickr power match works. Set Kickr to use power cranks as reference, and recorder the same workout on TR (just wahoo, no PM) and on Garmin Edge 1040 (just cranks, no trainer). Garmin showed 155 TSS while Wahoo/TR - 146. I believe that’s too much, this will seriously affect CTL and other data tot rely on.

Conclusion - Wahoo power match is crap. I will check once again with different setup and report how it went.

From these 2 pics (from the links), You should be able to get the 4iiii cranks to transmit as a unified Data (L+R) and this would solve one of your requests.

Try this feature out for BOTH TR and TD… 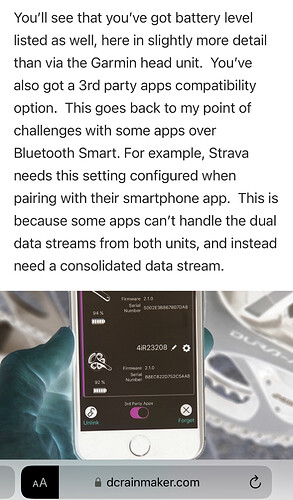 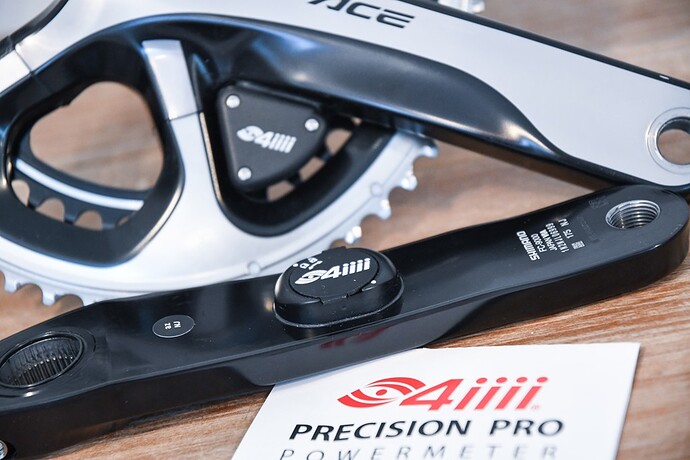 While there are many power meter options being touted these days, it’s a different matter to actually get something shipped to consumers.  And to do something that’s accurate and trusted (as well as reliable).  It’s been a couple of...

The screenshots are pretty old, but the 4iiii app does recognize both cranks as dual side power meter, the problem is that neither other app does.

you’re saying that the button/switch for “3rd party Apps” is not there correct?

Conclusion - Wahoo power match is crap. I will check once again with different setup and report how it went.

I would be interested to see the power traces in these 2 different conditions.
You can use How To Use ZwiftPower’s Dual Recording Power Analysis Tool | Zwift Insider to load the fit files and take a look. (or share the fit files)

I’m collecting 3 sets to see how different apps with different power match work and will share the folder here later today. 2 pairs are recorded, today I do TD, the last one.

Cool. I am interested in this too. I know when TrainerRoad did their Power match V2 after 5 years of people complaining about V1 it was significantly better. We need to do a V2 some day.

Sunday endurance ride: TR with connection only to Kickr, which has been set via Wahoo app to do power match. As I mentioned, total crap, 146/157 TSS.

Tuesday VO2 max workout: TR with both cranks and Wahoo connected, Wahoo power match is off. Result: spot on, +/-1W. The only time it wasn’t perfect was on 3rd VO2 interval in which I rolled in slowly. On short intervals I usually spike at the very beginning to offset trainer lagging power. 85/86 TSS

Thursday: threshold workout. Garmin Edge 1040 connected to both Kickr and cranks, as reference - Wahoo Bolt v1 connected to cranks only. Result: Garmin writes the real power from cranks and this is 100% confirmed by Bolt, deviations were within 1-2W when no drops. BUT: Garmin tends to keep you above the workout target, it’sa tiny margin at the beginning but the longer you are into the ride, the more above the target you get. Examples are the threshold intervals that are so supposed to be 280W. 1st and 2nd were almost spot on, last was 286W. TSS: workout 92, Garmin 93, Bolt 94. If Garmin had no power drops, then it would probably also showed 94.

I find it interesting, since most of the apps keep you usually below the target, not above.

My ¢5 for your wonderful service, man.

That confirms my experience. If you have the trainer and power meter setup with a ‘reasonable’ difference, the actual PowerMatch function works very well. If the difference between trainer and power meter is big (probably because you don’t understand how trainers determine power), results are less satisfying.
My 2 cents: do your homework before judging and don’t expect any app to miraculously correct physically impossible differences

. There are enough posts explaining the minimal routine to check if your trainer is setup to return a somewhat meaningfull power number.

I have added todays ride and updated the testing comments in the post above.

Is there another place you can upload the files to? Seems like need to be an icloud user

Zip file, should be downloadable with no iCloud account.